Let’s rethink ‘work, rest and play’ into our ‘retirement’ years 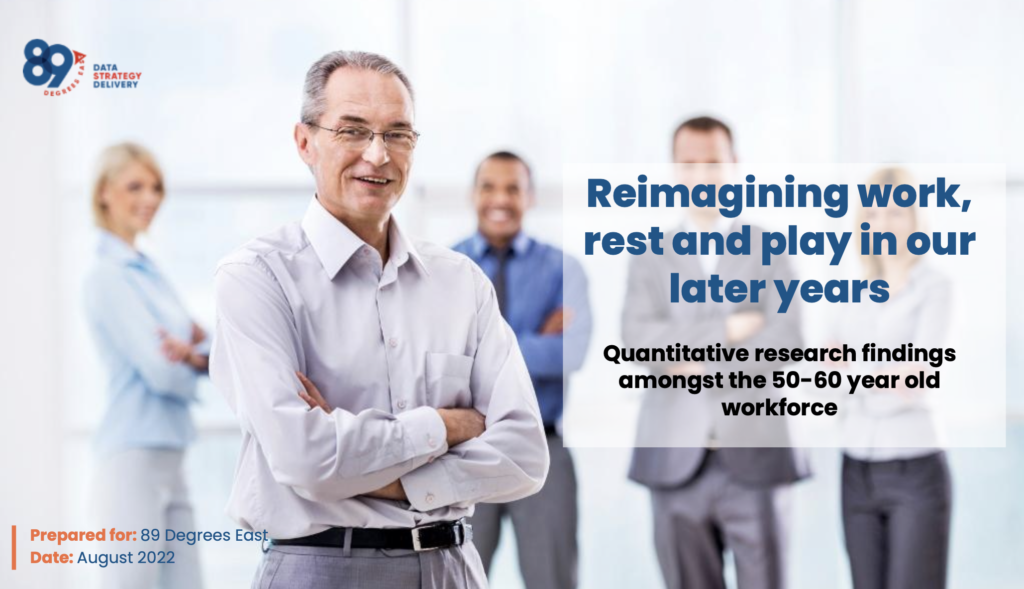 This article was originally published at The Guardian on 31 August, 2022 here.

125 000 willing and experienced workers are standing by right now. Will the government let them work?

Next year on July 1st, the official age of retirement will hit 67, completing the rise begun by the Rudd Government in 2009. Next week, a new Labor Government will gather people together at the Jobs + Skills Summit in Canberra to figure out how we increase participation in our workforce, presumably by means other than withholding retirement payments.

But new research done by 89 Degrees East shows that when it comes to keeping our most experienced cohort at work, giving older Australians more options to stay employed will be more effective and popular than raising the pensionable age.

This is great news.

This is far higher than Australia’s current workforce participation rate for people 65 or older (14.7%). It is on par with the 24.1% of New Zealanders who choose to continue working past 65, despite that being their eligible pension age.

That’s an extra 125 000 people who are experienced and willing to work right now. More than half of ACCI’s pipedream of 200 000 new migrant workers.

Older Australians told us there are things a government could fix which will help this group work now, but especially if it wants to include the extra 250 000 people currently aged 50-60 who might retire against their wishes as they hit 67 through 2039.

It really should be no surprise that as we live longer and are able to work more flexibly, people who enjoy their work would want to keep doing it. In our research, 42% of 50-60 year olds said “doing meaningful work” was a top 3 reason for them to stay.

But this large, ready and willing group has been overlooked by business and the government thus far.

The Jobs Summit issues paper says hardly anything about older workers, other than a reference lumping them in with the young and disadvantaged.

Business seems entirely focussed on bringing in workers from overseas – completely ignoring the massive additional costs of recruitment instead of retention.

Older workers are telling us we need a new mindset (and system) to help us retain and get the most out of employees at this stage of life.

The things older people want and are willing to do include upgrading skills and having more flexibility to deal with their health and caring responsibilities. Close to 2 in 3 older workers would consider updating, upskilling or retraining, including 3 in 4 of the people who say they want to work past 70. 52% said reducing stress and balancing good health with work is a top 3 concern. 50% (and 58% of women) rated part-time, job sharing and flexible working hours in their top 3.

But they also told us discrimination and a lack training pathways are holding them back.

77% of all people aged 50-60 years have experienced age-based stereotypes at work. The work done by the Human Rights and Equal Opportunity Commission (HREOC) on age discrimination has been telling us this for a while.

A related concern about the value of retraining or lack of suitable training also holds older people back. Half are worried about the cost (51%) and time (49%) involved with training. 33% said they were not sure what courses and opportunities are available.

In short, they are in a stage of life where they need a bit more time to take care of their health and some training to upgrade their skills as technologies change (as frankly, do many younger people). But young people have access to apprenticeships and graduate programs. Families raising children thankfully have parental leave and updated attitudes towards part-time work arrangements.

The challenges facing 50-60 year olds don’t get the same recognition or assistance as other generations. Even worse, there’s a lazy assumption that this group is about to leave the workplace soon. It’s an appalling and costly way to treat some of our most valuable and experienced people.

As more of us stay healthy and live longer, Australia needs to reimagine how someone manages work with the challenges of a new but still productive stage of life. We need to update the system as well as the old-fashioned attitudes and stigma that has held us back from making these adjustments in the past.

These changes are far more achievable than calls to increase our annual migration intake to levels that have never been achieved before, let alone while we are still in a pandemic.

Indeed, without change, some of our best workers may take their desire to keep working to a country like New Zealand!

This massive opportunity should be front of mind for all those attending this week’s jobs summit.

Dr Rebecca Huntley is Director of Research at 89 Degrees East and is one of Australia’s foremost researchers on social trends.

She is also an author, presenter and public speaker.